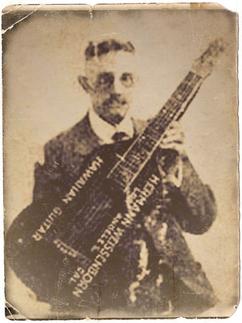 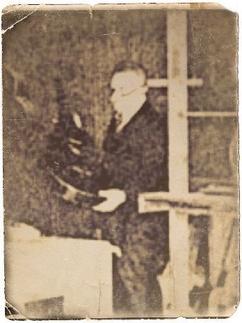 The Man, The Guitar & The Legacy

Hermann Weissenborn never lived in Hawaii, and it was pure luck and happenstance that he was in the right place at the right time to begin building his Hawaiian guitars" [Tom Noe]

Karl Hermann Heinrich Weissenborn was born in Hanover, Germany, on June 30, 1863, to Joseph Weissenborn and Gebeke Hanischen.  Very little is known about his early life; however, it is known that he was involved in instrument building  or repair as early as the late 1870s.  He was listed in the 1898 Hanover city directory as an instrument maker, located at Ihmebruckstrasse 2.  He was a widower when he arrived in New York in 1902.  He moved to Los Angeles in 1910, listing himself as a piano repairman. In 1912, he briefly partnered with one Fritz Pulpaneck to make violins in a short-lived partnership styled Weissenborn & Pulpaneck.

In 1914 he placed an advertisement in the Los Angeles city directory touting over 35 years of experience in instrument building and repair.  Fritz Pulpaneck continued to make violins in Pomona CA into the 1950s. Steel  guitar maker Chris J. Knutsen arrived in Los Angeles in 1914 to make instruments for music publisher and teacher Charles S. DeLano, but could not keep up with the demand for DeLano-branded Kona Hawaiian guitars, particularly with the growing Hawaiian music craze and the impending Panama Pacific International Exposition in San Francisco.  DeLano turned to other stringed instrument makers in the Los Angeles area, including Hermann Weissenborn to build steel guitars.  Weissenborn’s earliest Los Angeles addresses were located within the garment district near DeLano’s studio, and in 1914, about the time he began making steel guitars, he met a young sewing machine operator named Concepcion Ybarra, who had immigrated from Mexico in 1912.

On October 2, 1915, the then 52-year-old Hermann Weissenborn married the  25-year-old Concepcion.   About this time, he began placing into his guitars a picture label of himself holding a steel guitar.  Also, about 1915, Hermann met one Albert A. Kolb in a nearby lumber yard, who was able to provide Hermann with koa wood, beginning a long-term relationship.  In 1921, Hermann’s then 31-year-old son Hermann Friederich August Weissenborn immigrated from Germany to work with his father Between 1921 and 1923, Weissenborn built a small number of steel guitars for Christophe’s Dept. Store in San Francisco under the “Italian Madonna” and “Maui” labels.   In 1923, together with his son, bookkeeper August Mayer  and  woodworker/furniture maker Albert A. Kolb, Weissenborn established Weissenborn Company, Limited and set up a factory at 1196 S. San Pedro Street to build instruments.   As is common in the furniture industry, a brand featuring “H. WEISSENBORN LOS ANGELES, CAL.” inside a shield was created  to be burned into the backstrips of factory production instruments.  Since the same brand was used throughout production, progressive signs of wear and tear of the brand can be seen in the branded instruments.

Hermann’s son, Hermann F.A., died July 21, 1926, and Rudolph Dopyera was hired as shop foreman for a brief period of time before returning to the National Dobro Co. by 1930.  In 1926, Hermann and Concepcion resided at 937 E. 21st Street, just a few blocks south of the factory.   Steel guitars were offered in four styles from plain to fancy ornamentation.  The factory also turned out Spanish guitars in four styles that paralleled the steel guitars, as well as a limited number of ukuleles, mandolins, pectrum guitars, and perhaps even violins, although none of the violins ever surfaced.  He also continued to make Kona guitars for DeLano.  East coast distribution was handled by Henry Stadlmaier until 1928 when Tonk Brothers of Chicago took over national distribution.  By 1930 the demand for steel guitars was ebbing, and Weissenborn’s production declined.  Some of the rarest of Weissenborn’s steel guitars include ones with solid square necks built during the 1916-1922 period, and so-called teardrop models built in 1926 and continuing into the 1930s.

During the Hawaiian guitar boom, emerged the hollow neck guitar with its improving tone and increased volume due to its larger sound chamber that extended right through the neck of the guitar. The instrument was very succesful until the late 1920s, when resonator instruments like Nationals and Dobros made their appearance and rapidly started the demise of the Hawaiian guitar heyday and ultimately the Weissenborn guitar.

Opinions regarding the quality of Weissenborns' construction vary though. Many players dismiss Weissenborns, with their visible saw marks, rough braces, and glue squeeze-out, as badly made. "They're not made badly," retorts David Lindley, "they're made simply--sometimes a little bit crude, but a fantastic, superior design. They all sound good.""Not fine-sanding saw marks doesn't hurt the tone," says Ben Harper. "He left an edge like music needs. If you take too long with anything, it loses its effectiveness. He took the right amount of time."

Light construction is the blessing and the curse of Weissenborn guitars. It gives them their unique tone and volume but makes them susceptible to ravages of time, environment, and overstringing. That's why many surviving Weissenborns need braces and bridges reglued, cracks fixed, or seams rejoined.

It is not really sure who was the inventor of the hollow neck guitar, but the two most important names are Hermann Weissenborn and the Norwegian guitar builder Chris J. Kutssen. Knutsen is today is widely accepted as the inventor of hollow necks, and undoubtedly must have influenced Weissenborn in his early designs. But history will show Hermann Weissenborn perfected the concept and made the superior instruments of the two luthiers. Knutsen didn´t pay so much attention to the quality of sound and finishes and that's perhaps why less of Knutsen's guitars survive today and why Weissenborn is regarded (rightly or wrongly) as the "King" of hollow neck guitars to this day.

Weissenborn player Christiaan Oyens sums up perfectly for me the very essence of a Weissenborn with these thoughtful words.....

"You are drawn to this instrument in a strange but beautiful way when you first experience its haunting and beautiful sound. There is no other style guitar that sounds like it, and it mysteriously allows your inner thoughts to be so satisfyingly expressed so warmly in music. Once you begin playing this instrument, you will find an escape into your own world of musical dreams and creativity and you will find it very difficult to return, as you continually hear its remarkable sound."

"These instruments have magical qualities of sound, both bass and treble, with amazing sustain." "The Weissenborn has the gift of human vocal quality; a richness that captures both sweetness and edge. Under capable hands, it will give your music a life that speaks of emotions and colors, experiences and journeys - this is what happens to me every time I play a Weissenborn."

"It is the greatest sounding acoustic instrument ever made. It is very expressive and it says something new to me everyday. Every time I pick it up it sings something new."

"The Weissenborn is the sound that is in me. Nothing else can channel the spirit of my music."

Author and Weissenborn historian Tom Noe has written a book along with fellow writer and guitar historian Dan Most entitled "From harp guitars to the new Hawaiian family - Chris. J. Knutsen (History and development of the Hawaiian steel guitar).