Michael Rusen is a small independent luthier based in Victoria BC, Canada. He is a part time weissenborn builder who has ambitions to become a full time luthier but is currently content with expanding his skills and repertoire in a controlled and scaled down manner. He was privileged to be taught and tutored by master weissenborn luthier Neil Russell of Celtic Cross Instruments in the finer skills of building hollownecks. With over 30 years of experience at his disposal Michael has relished the opportunity to learn from a master craftsman.​ I was fascinated by this “teacher/pupil’ side of their story and was thrilled when both parties in this equation agreed to talk to me. Neil’s take on things has already been published earlier in the year so now it’s the turn of the ‘Graduate” to shine some light on his side of the story and give us an insight into why this niche instrument has taken over his life with such a strong hold. 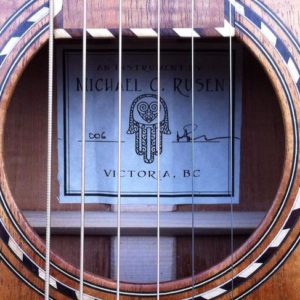 Building Weissenborns is not your everyday career path and one I’m sure won’t lead to fame and fortune ultimately so what’s the allure?

“It’s not a career for me, though I hope that may change in the future. It’s about taking a bunch of pieces of wood and turning them into something that looks and sounds really good. It started when I had my first experience ordering a custom built instrument. It was from Neil Russell, of Celtic Cross Instruments. He was local, so I got to go visit and see some parts of the process. I was hooked. Not only with the idea of making my own instruments, but with the sound of a Weissenborn guitar. It just grabbed me and it hasn’t let go since. Also, the idea of an instrument I created being played years after I’m gone is appealing to me”.

Tell us your first recollections of hearing and playing a Weissenborn.

“I first heard a Weissenborn when I listened to Xavier Rudd. It was an interesting sound and I really liked it. It wasn’t a ‘traditional’ sound but it inspired me to purchase one. My love for it grew from there”.

Do you build other instruments other than weissenborns?

“I don’t offer anything else. But I dabble. Instrument making is a journey that takes turns along the way, but Weissenborns are my foundation. Currently I’m making a classical & flamenco guitar”.

“I’m sure that’s probably true. But I’m not in it for money, its nice to have money coming in but that just allows me to continue building whatever I want in my spare time. It’s not about maximizing profit”. 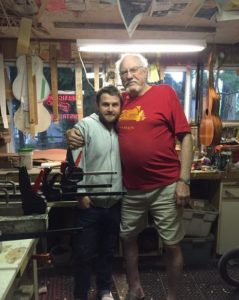 How did you and Neil Russell of Celtic Cross Instruments meet?

“Neil built my second Weissenborn copy which was my first custom instrument. I got his info from a  local shop after becoming dissatisfied with my laminated Weissenborn copy. He invited me over and I found him to be an easy person to spend time with”.

How was the subject of teaching you the trade approached initially?

“I remember warning him that I was very excited about the process. I’d asked him he’d taken people on before, which he had. It took some chipping away to get him to take me seriously. I took a building course by a man named Jeremy Hamm in La Riveiere, Manitoba (Awesome/talented guy!) and built a few instruments. After I brought them home and started setting up my own shop, he knew I was for real”.

Do you still see Neil regularly?

“Neil is one of my dearest friends. We’ve see each other probably once or twice a week for years now. We speak on the phone almost daily”.

Are you still learning new things about lutherie?

“I always will be. There are many ways of doing the same task, in effort to be efficient and consistent. I will always experiment. And there are many, many things I haven’t learned or haven’t had experience building. I look forward to more mistakes, as painful as they are, I value them for what they teach me”.

Describe to us Neil from a personal (friend) and professional (teacher/mentor) point of view.

“There isn’t much of a difference. He is just as generous with his knowledge of instrument making as he is with his invites to Christmas dinner. The only difference now is that the teacher/mentor relationship has morphed into a long-term friendship, rather than his student, I’m his friend. So, I’m not as afraid to mention a mistake these days”. 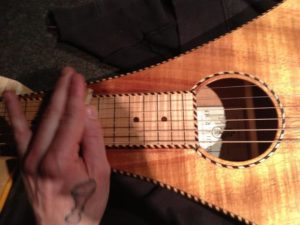 So are you a Weissenborn player first then a builder or the other way around, or neither?

“Builder first, player second. I’m ok at it, but I know I build them better than I play them so I’d better focus my efforts”.

What Weissenborn players do you like listening to in your free time. I understand Xavier Rudd just came touring through Canada did you manage to see him live?

“I missed him last time. But I’ve seen him many times.  I like to listen to David Lindley, Ben Harper, Xavier Rudd, John Butler and Thomas Oliver. They are all amazing and all very different”. 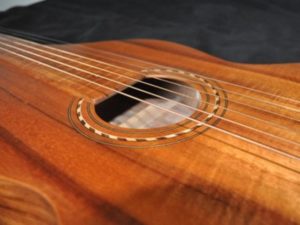 How many Weissenborns have you built to date?

“I’m on number 30. All different shapes and scale lengths, though. I’ve got it down pretty good now. Still a ton to learn, every build is different”.

Any preference of wood choice, do you prefer native or exotic?

“As with most of us on this site, I tend to lean towards Koa because it’s beautiful, easy to work with and it sounds great. But it’s getting expensive and harder to find. The woods I use that are from closer to home are: maple, walnut, spruce and cedar. I’m also excited to work with myrtle, from Oregon”. 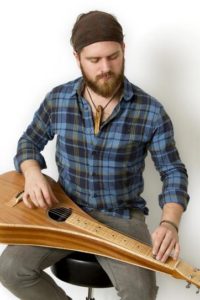 It must be very rewarding to have a player like Adam Bay at the top of his game playing and endorsing one of your instruments? How did you and Adam hook up?

“Its a treat for a builder to have someone as passionate for the Weissenborn as Adam. He is very dedicated and really talented. I look forward to his future. His manager called me and arranged a meeting. He came by my shop and we hit it off. It seems that Victoria BC, Canada is a popular place for Weissenborn nuts”.

Have you had any interest based on that connection, with Adam being asked who made his instrument and getting in contact with you as a result.

“Not as of yet. I think it will help after his upcoming instrumental Weissenborn album is released”. 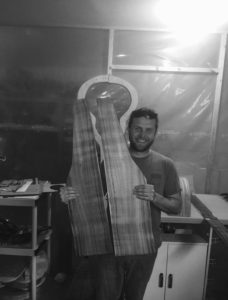 Here’s something i’d love to hear your thoughts on. How do you feel about mass produced Chinese copies flooding the market in recent years? I’ve had a few discussions with various people in the trade and I’ve personally come to the opinion that this surely must be a good thing for custom/high-end luthiers in the long run. Some luthiers say they are losing trade as a result of cheap Asian instruments flooding the market. But no sensible person starts playing a $2000 instrument straight off the bat. They dip there toes and buy affordable starter instruments then eventually and normally quickly trade up after the bug has got hold of the serious players. So surely that increases business in the longer term for high end builders does it not?

“At first I found the prevalence of factory made instruments discouraging. I now believe that everything has it’s place. As I stated earlier, it’s not about money, so I will continue to make them regardless of what happens. I started on a cheapy myself and I understand that everyone else may too. I just hope the instrument gets the respect it deserves”.

Do you own any originals yourself?

“I don’t. But am fortunate to be a friend of Neil’s. His collection of beautiful, historic pieces are available to me at any time”.

Are your designs based on what Neil taught you or have you tweeked any details?

“The basic concept of construction is the same. I have a slightly different body shape and some of my methods and creative expressions set them apart. Though, they are very similar”. 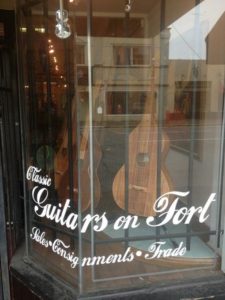 Are most of your instruments sold locally geographically, any over seas orders?

“Having just joined the online market with my website, most of my instruments have sold from local shops. The market locally is almost non-existent but I’ve managed to stay afloat. I hope to increase my orders with over-seas business in the future”.

Tell about the business logo you use, looks a bit Celtic in origin?

“It’s actually of middle eastern origin. It’s called a Hamsa. It is a symbol worn for protection. But I chose it for the fact that, to me, it signifies creating something by hand with love”.

Where are you working out of at the moment?

“I am fortunate enough to have lovely supportive parents. They have a large garage that would go otherwise un-used. Victoria is an expensive place to live. I can’t yet afford my own space as I work full-time to support myself and my building habit, I make instruments in my ‘spare’ time”.

Are you making Weissenborns to your own preferences at the moment in order to expand your experiences with different woods etc or have you been fortunate enough to have some commissioned work from the customers keeping you busy?

“Most of the instruments I have made have been what I thought others may like. I have had commissions but when first starting out, you have to build, build, build. There’s only one way for people to learn about my work, and that’s by having it out there”.

How many guitars would you have to make a year in order to make a half decent living out of purely luthiering Weissenborns?

“I don’t charge a huge chunk of money for mine. My prices are reasonable. So it would be nice to make 3 or 4 a month and live off of that”.

Is that the long term goal ultimately, making a living from building Weissenborns?

“I really enjoy my career in the healthcare field. I’m not sure I’d stop doing it completely. I look at instrument making as something to possibly help in my later years but we’ll see. I would be very happy making wood dust all day”!

Other than Neil what luthiers do you admire from a professional point of view?

“Obviously, Hermann Weissenborn! Tim Kill for his extreme talent in design and inlay. I admire Tony Francis for his talent and his respect to the integrity of the instrument. Jeremy Hamm of Hamm-Tone for his contagious optimism towards building and possibilities. There are really too many to mention”.

Are you ever in contact with any other Weissenborn luthiers outside of Canada and do you ever trade stories and building tips?

“I pick other makers brains from time to time. Some are keen to chat, others aren’t. It’s nice to speak to people with so much in common”. 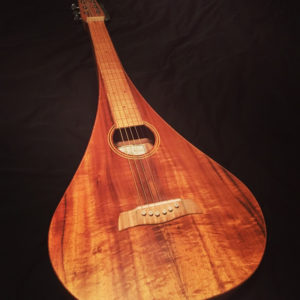 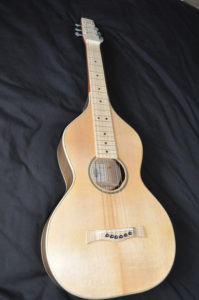 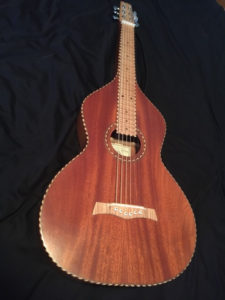 “How about a baritone teardrop double-neck kona, haha. I’ve never used master grade Koa, that would be a treat. Reproductions are something I’d like to experiment with. I’d like to make a lot of things. Many more years of study and practice ahead”.

You have a website up and running now don’t you. Tell us about that?

“Yes. I made it myself. I’m not sure how it measures up but at least its something. A way for people to get in touch or view my work. I haven’t updated it lately as Ive been very busy. I am doing a small blog page though, I get to write about anything that interests me! It’s fun and I hope people enjoy it for what it is”.

Thanks for letting us into your world Michael and TWiE wishes you the very best in your business.